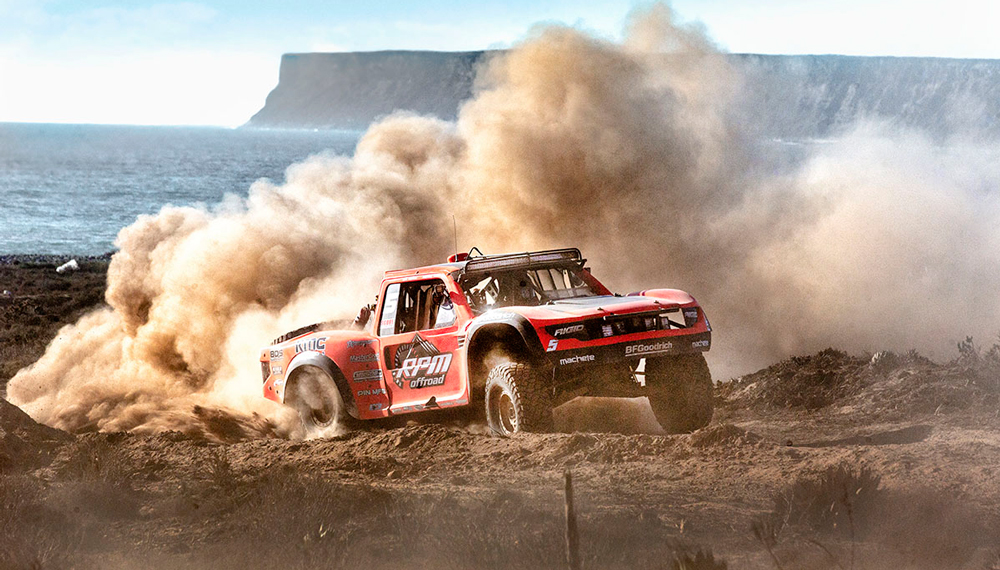 Lopez was first to the finish line in Ensenada, Baja California, but was later penalized twenty minutes for missing two of the ninety-five virtual checkpoints scattered along the 821.38 mile racecourse, dropping his finishing time to 16:14:55. The penalties pushed Lopez out of the top spot and overall victory at the legendary race but didn’t take away from his performance in one of the most grueling races in off-road.

Lopez started in ninth position behind Robby Gordon and suffered an early front flat tire but pushed on without any other problems to battle Rob MacCachren in the final miles. 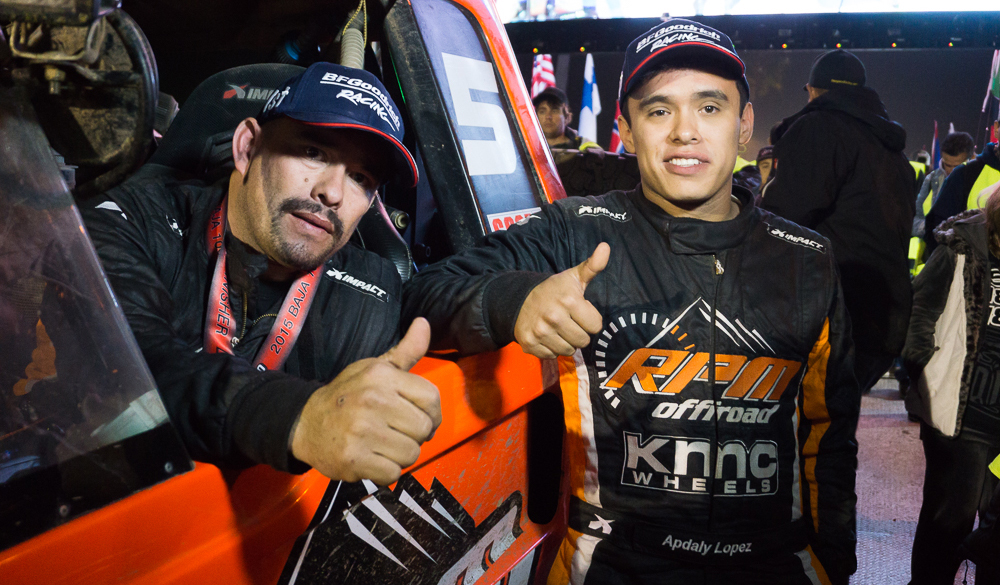 “The race course was really rough and the weather conditions changed in different sections of the course. The course was technical and we had to work to take care of the truck,” commented Lopez.

With a win at the Baja 500 earlier this year and his dominating performance at the Baja 1000, Lopez’ overall points championship proves that the #5 Trophy Truck, powered by Dougan’s Racing Engines, is one of the top trucks on the course. At just the age of 20, Lopez joins a list of elite racers that have ever claimed the #1 plate in SCORE-International. 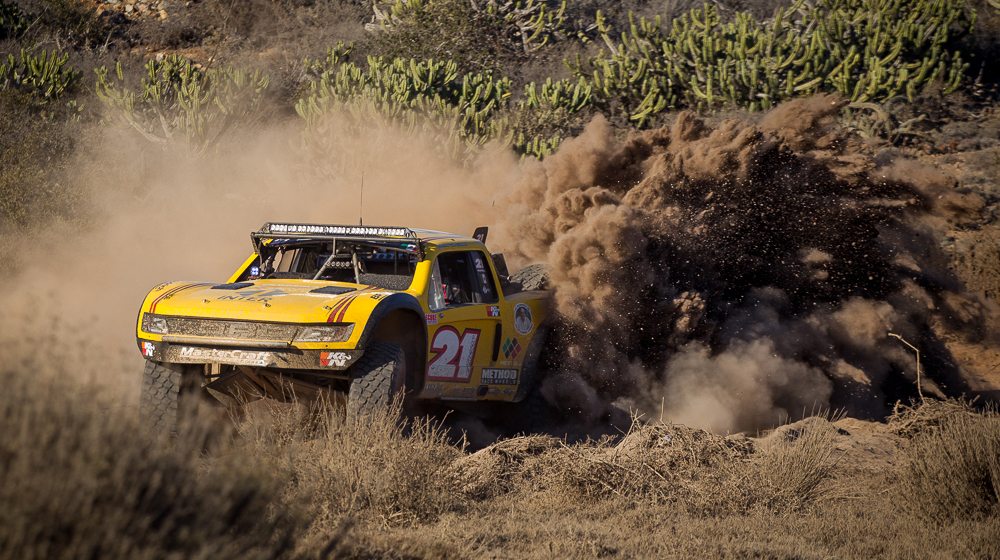 Dougans racers took six of the top ten spots in the Trophy Truck class. #17 Lalo Laguna earned the final spot on the podium with a time of 16:17:03. Lalo shared driving duties with Josh Daniel, who said that the team drove about 800 miles with no communication. The team raced as fast as they could without an intercom, driving strictly off the GPS and hand signals. “What a day! The 2015 Baja 1000 was one of the toughest races I have ever raced. Fog, silt, rocks, dust all were factors that make this years race so difficult but we made to the finish,” said Laguna. Laguna’s third place finish should lock up the runner up spot in the overall points championship.

Tavo Vildosola was the second fastest qualifier at SCORE’s SEMA qualifying event, which meant mostly clean air to start the race. Tavo started behind Dougans teammate #5 Justin Matney and ahead of a stacked field of racers ready to hunt him down. According to Tavo, the truck ran flawless all day but two early flats forked over key position on the race course. Around race mile 295, Vildosola got stuck in the silt beds that plagued many racers, including #9 Gary Weyhrich of TSCO Racing and #1 Steven Eugenio of Galindo Motorsports. 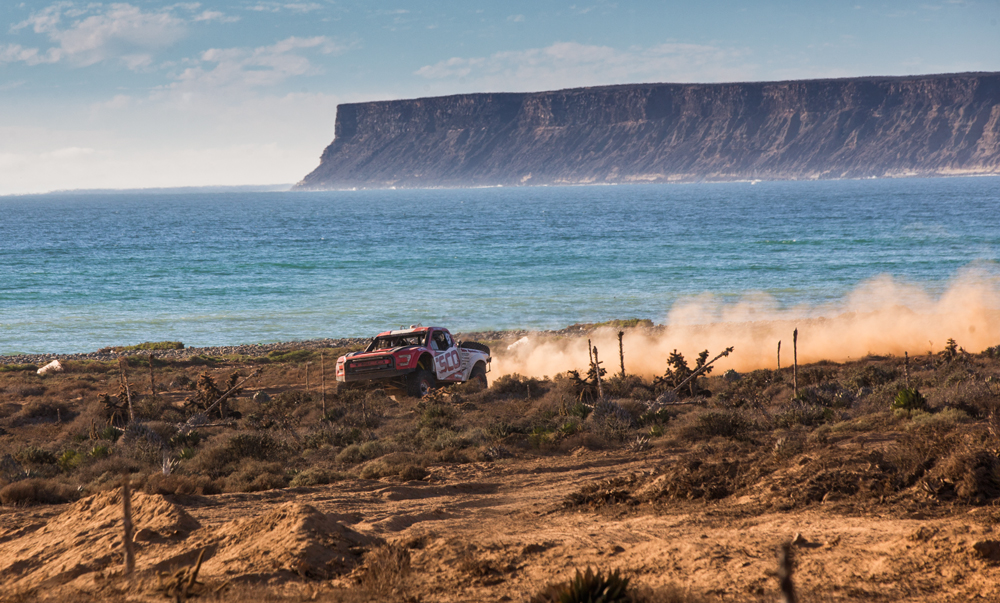 Gary Weyhrich started 12th and moved up to 9th on corrected time by race mile 134 as the race course ran along the coast. At the teams first fuel stop at race mile 200, Weyhrich was fifteen minutes behind the lead time.

However, the #9 got stuck at race mile 295 as they approached an already stuck Tavo Vildosola. Co-rider Jason Duncan dug for about 30 minutes, then Tavo’s crew pulled them out and the two continued on. 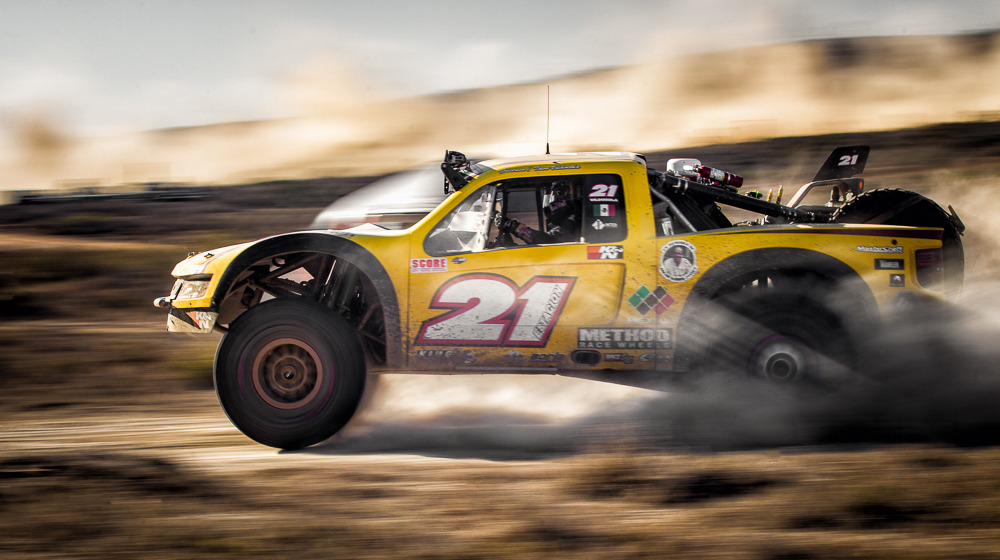 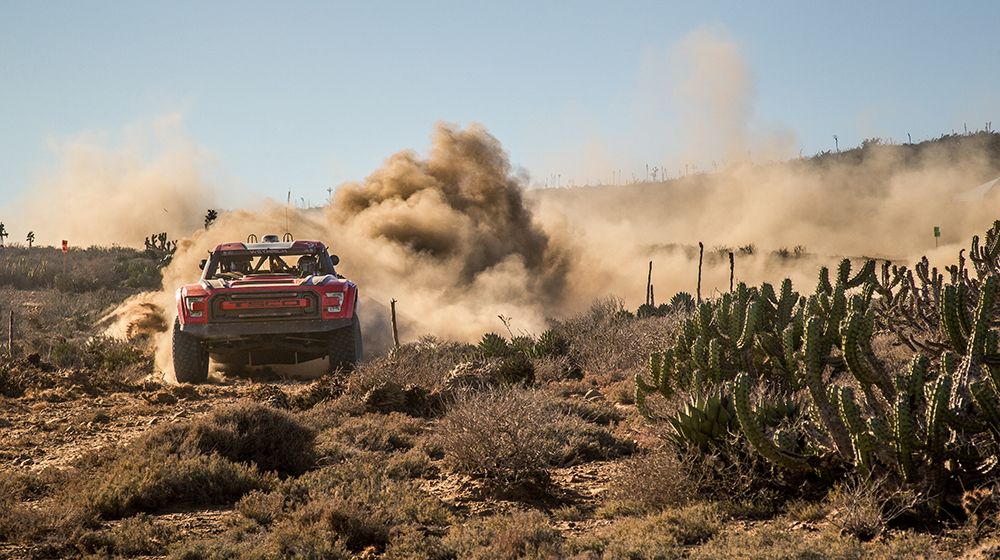 Vildosola battled back and cruised to a solid sixth place finish. Gary passed the truck on to brother Mark Weyhrich and Ryan Williams at race mile 350. TSCO was down on time by nearly two hours at that point and Mark rocketed out of the pits but a front flat around race mile 400 was the nail in the coffin for the team. Williams fixed the flat, then hopped behind the wheel to race mile 465 where Gary got back in and headed to the finish line in 9th place.

Current SCORE points champion, Steven Eugenio, also spent some time digging out of the silt at race mile 295. The bottle neck that quickly jammed the race course began to grow bigger and at that point it was a waiting game for everything to clear. 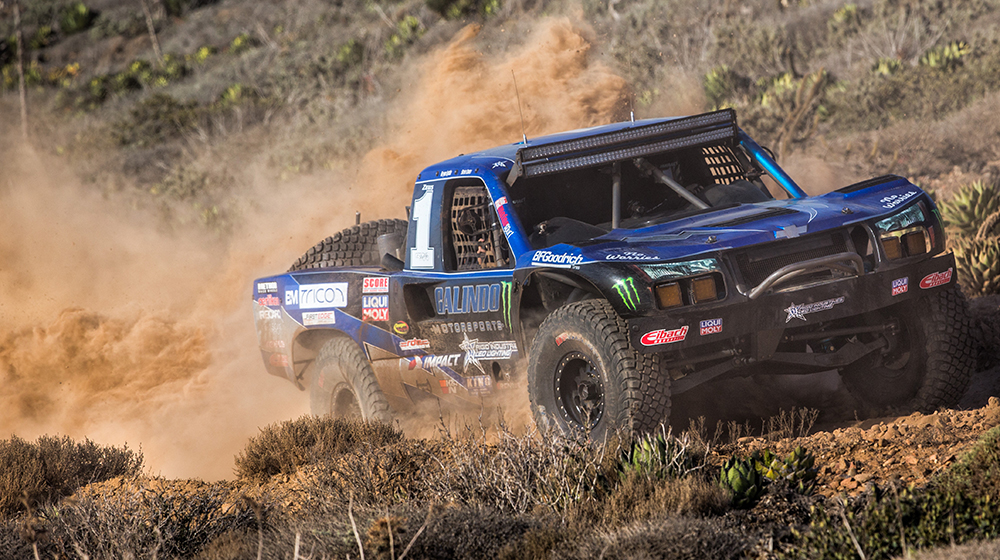 “We got held up and lost some time there. We lost about 10 or 15 minutes but in a race like this losing 10 or 15 minutes can happen anywhere. With a little bit of luck, I think we could have won one of the races this year and with some luck maybe that changes next year,” said co-driver, Armin Schwarz. Eugenio and Schwarz finished behind Tavo in 7th place in the Trophy Truck class.

Earlier this year, Cameron Steele made a strategic move to sit out this year’s Baja 500 to spend some time testing the Dougans Racing Engines 474 8 stack power plant (up from the 454 injected). Steele logged over 1,000 miles before the Baja 1000. According to Steele, the gamble and plan paid off and worked perfectly. 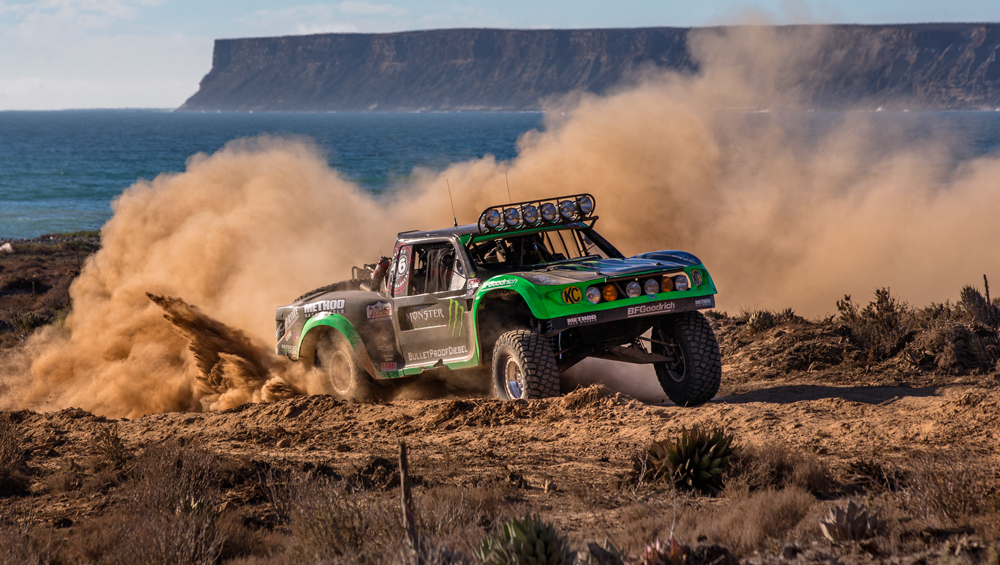 Steele quickly moved up two positions and at race mile 133, Steele’s crew and others near by had him leading on time. At their driver change at race mile 283, the #16 was second on corrected time behind race leader, Bryce Menzies. Through Puertecitos, the teams timing had them third and it looked like a podium was within reach as the lead pack started to separate itself. However, at 90 mph, the steering went out just past VCP 71 at mile 634. Steele spent nearly two hours diagnosing the truck but got it started and charged in to Ensenada with a time of 18:23:00 and finishing in 10th place. 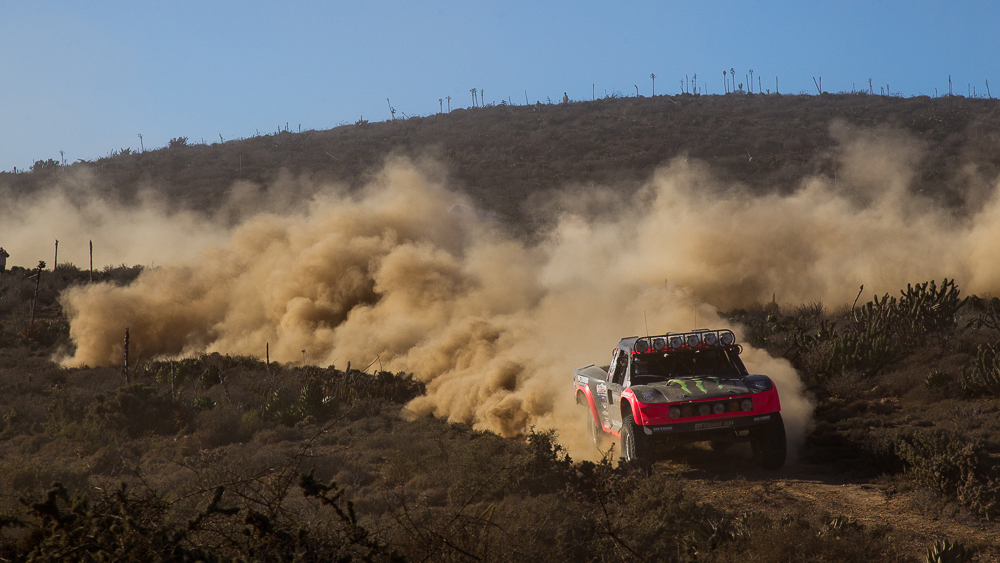 #14 Heidi Steele shared driving duties with Cody and Brian Parkhouse. The team ran in to mechanical issues that cost them a couple hours but managed a 15th place finish amongst the 32+ Trophy Trucks that started the race. 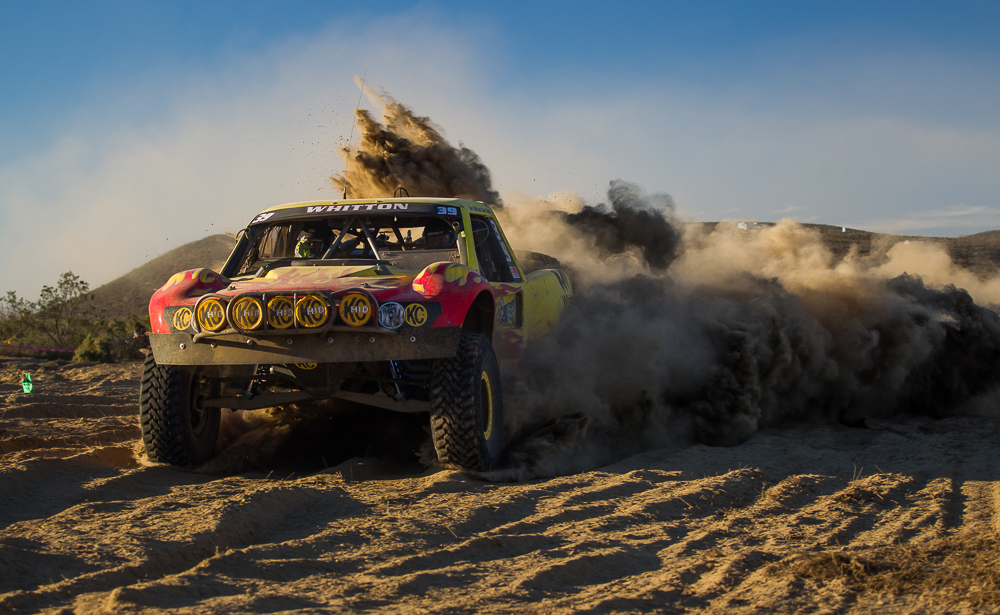 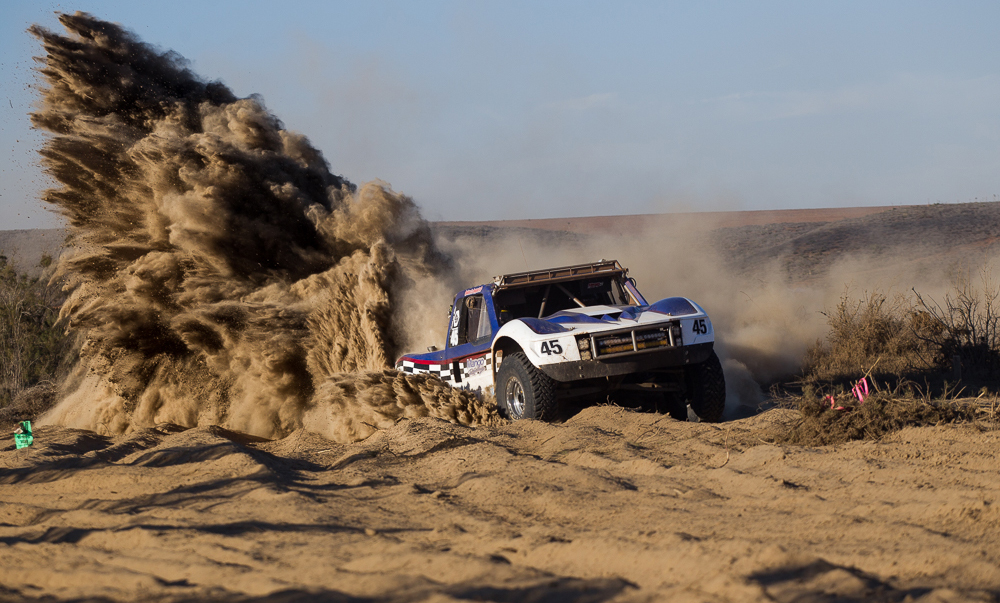 #75 Mike Cook and #45 Gary Mangess both ran solid races just missed out on the top 10 with 12th and 13th place finishes.

#59 Craig Potts, #4 Justin Matney and the lone Class 1 car of #185 Justin Davis were the only three Dougans Racing Engine racers to not finish the 2015 SCORE-International Baja 1000.

Dougans Racing Engines will finish out the 2015 off-road racing season at the Best in the Desert Henderson 250 December 4th-6th.